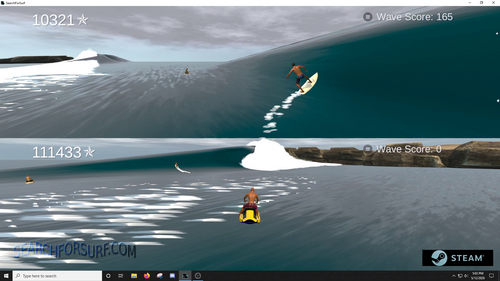 Search For Surf has been updated to include two player contests in this 3D open world physics based surfing game.  Challenge your friend and test your abilities by competing against them in a contest.  Choose a time period and the number of waves that count for your total score, and surf until you hear the horn to end the contest.   Player selection has been re-added since the last game was uploaded.  Now you can choose different players or both play the same player at the same time; like twins.  Don't worry, there's a shiny new board so you can tell which player is yours on the split screen.  Try it, it's really cool to surf with two players in an open world environment even if not competing.  You can each ride a jet ski and each surf, and each go on land.  You can even surf the same wave together.  Also, if this is your first time surfing or playing use the "Y" button at the three beginner breaks to get a wave.  It makes catching waves way easier now.

Get Search For Surf